First note: Shadow, the cow, likes to roll in poop. That’s our guess. Hope, our other cow, is clean. Her coat is thick with its winter growth and soft to the touch. Shadow has dried scales of poop all over. We assume that she poops, realizes it’s warm, and lays right down in the warm wet slime. So not only is she ejecting a bloody mass before the calf … she’s also covered in poop.

You can’t say you weren’t warned!

We weren’t sure how to share this story. Sometimes we will start telling someone about chicken processing … and the person will interrupt to say they need no more details. That’s a whole other blog post – but in light of that we wanted to respect our community and the details people may or may not want. This would have been a struggle with or without the end result because birth is bloody and messy (and so is farming) and some people cringe at bloody and messy. These people tend not to be farmers. And then farmers get stuck in their own farming world and forget that the rest of the world isn’t used to side stepping fresh poop in the pasture, swiping mucous from newly birthed piglets, or work with hands detailed with fine lines detailed perfectly with tiny dirt granules.

But after posting on facebook, it seemed clear that even if people aren’t milking cows regularly, or finding a perfect nesting spot for a broody hen, or bidding on the perfect cow … people are interested in what authentic sustainable farming is like in the day-to-day.

So here it goes:

Shadow was bred on a Wednesday. On a Saturday, we bid on her, and brought her home. She never showed signs of heat (mooing, jumping on the other cow, or us!, etc) so we assumed she was bred, she was pregnant, she “had settled.”

Cows gestation is 279-290 days with 280 being the average. At 287 days, Shadow still hadn’t calved, and Jerseys tend to be a few days earlier than other breeds. A very kind farmer who is relatively nearby was posting on our fb wall asking for updates. She offered suggestions and knowledge around calving, particularly with Jerseys. Hope’s calving had come suddenly, before we expected and with beautiful drama – but with no intervention from us.

With Shadow it was a checking-every-day-keep-waiting situation. We were all anxious to meet our newest addition to the farm and anticipation was high.

The morning of, Josh and Del checked before going off to preschool and I checked again while doing chores (approximately 1.5minutes after Del and Josh checked).

During afternoon chores, I noticed something different. There was definitely contractions and opening of Shadow’s vulva.
My mom missed a calving in June and didn’t want to miss this one. Josh shook his head in disbelief as I went to tell my mom that Shadow would be calving soon.
“It’s probably still hours away,” Josh informed me.
“I know,” I replied.
“Are you just going to wait here the whole time?” he asked.
“Yep,” I said.

So my mom came out and the kids came out intermittently.
There were frequent reminders that they needed to move slowly and quietly to respect the birth process. I even insisted Noah remove his red coat fearing it would stress the cow. Don’t they see red or something? Upon finding out about this, Josh laughed and the next time Noah came into the barn, I told him he could leave his coat on. 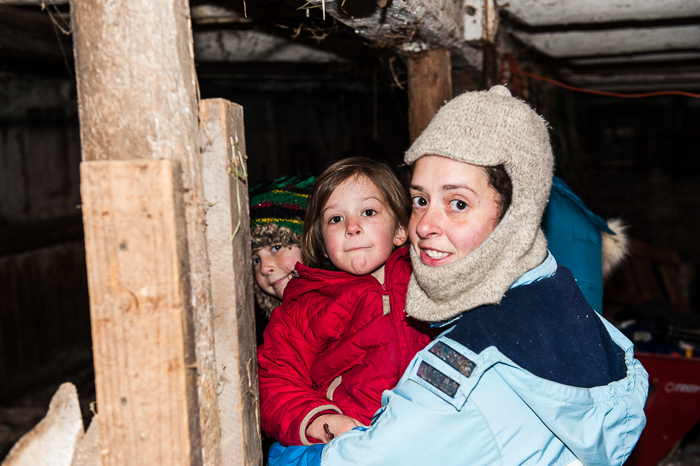 It was cold, but warmer than the 20 below temps of the previous few days. Shadow moved to the farthest point she could from Hope … who was happy to be left with all the hay to herself. Shadow is the alpha cow out of the pair and has a habit at the edge of the manger, pushing Hope further and further to the side … Hope not realizing she can walk around Shadow and have 3/4 of the manger that is not being blocked – or maybe she just doesn’t want to bother moving. A few times Hope wandered over to Shadow (leaving behind that coveted hay) to take a sniff at Shadow. 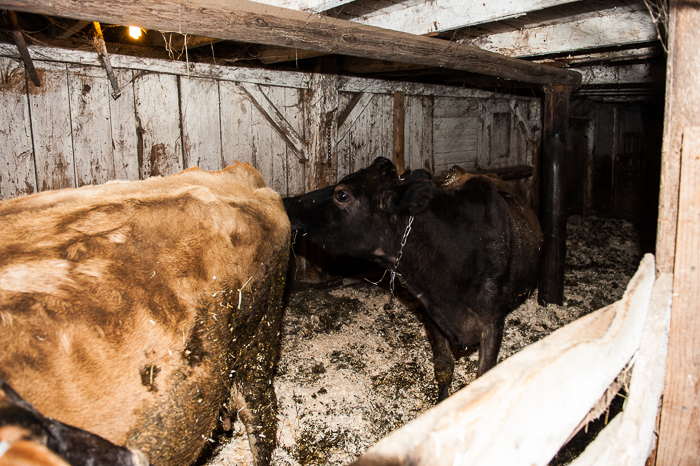 We waited and waited. There would be some progress and then in between contractions that progress would slowly be pulled back up inside of Shadow. There were frequent dashes to the house to call for Josh to come look. We were always told it was this or that, nothing to worry about. 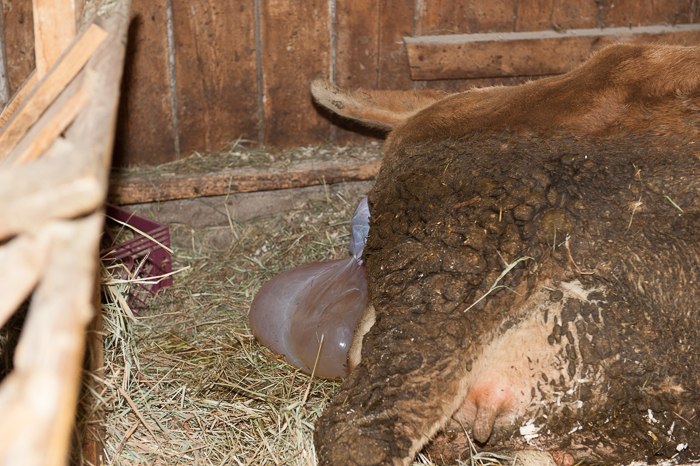 Did I say it was cold? I was thankful to be out of the take-your-breath-away wind. Del’s hands were cold. Josh turned on a heat lamp we had ready for the calf for Del to put her hands under. The grownups were thankful for the dull heat the lamp gave off too.

A small splash and more of the water has come through as well as blood. This baby is coming! 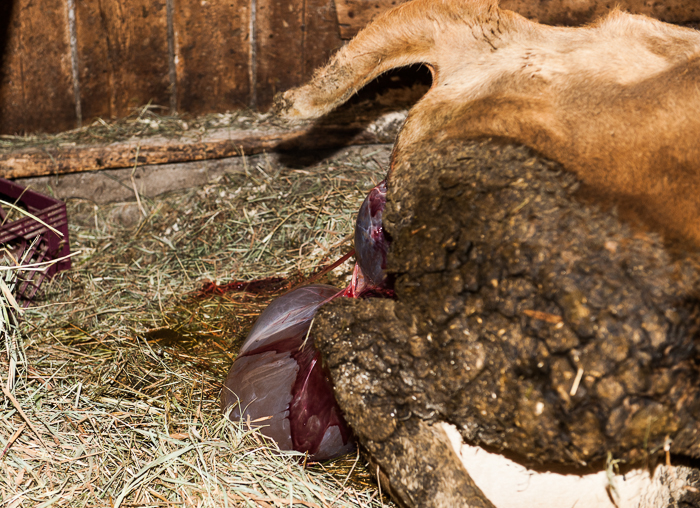 At this point I was running into the house to ask what that black bulge is! It looks like NOT hooves – front hooves are what should appear first. 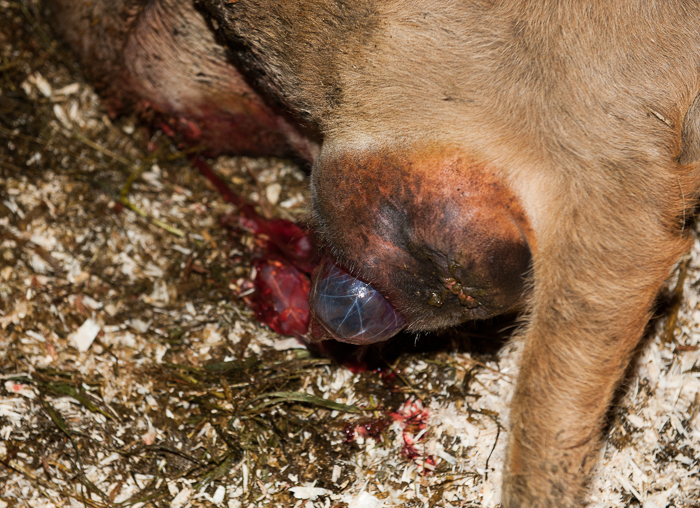 Josh said it was the bulge of the bag of waters. Forgetting that there had already been a terrific splash, I was comforted by this “knowledge” and returned to the barn to watch the two-steps-forward-one-step-back birth progress.

At this point I wasn’t sure what we were seeing. With the gift of hindsight – it’s the bottom of the calf’s chin with one leg bent back at the ankle – all still in the membrane.
“I think it’s going to be big,” Josh said, “that’s why it’s taking a while.”
“You can tell that by the nose?” I asked incredulous.
“Yeah,” he replied nonchalantly. “Bigger usually means bulls. I bet it’s a bull.” 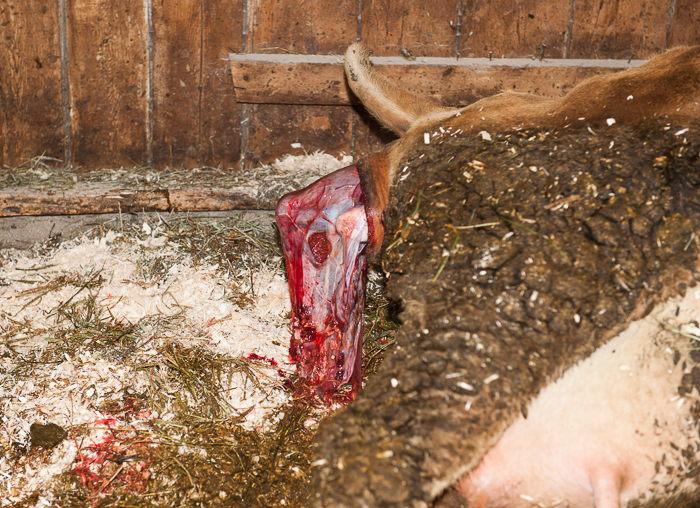 When any creature is birthing I think we sometimes lose sight of the fact that there is actually a living breathing being at the other end – we (or maybe just I) get so caught up in the business end of things. So here is Shadow up and in labor. There were some shots of her “crazy eyes” but this was more a funny look when she was trying to see what was going on back there, not a funny look because she was contracting. 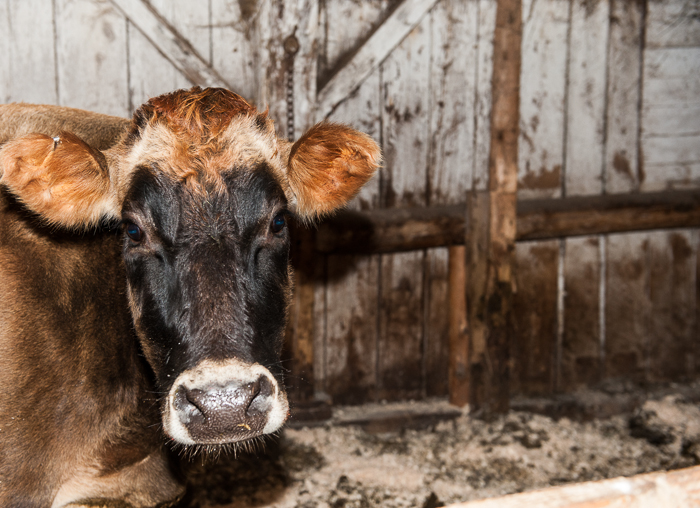 Back to the business end of things … see the eyelashes along the eye lid? This was the point when I asked if we should help. Maybe we should be clearing the nose and mouth so the calf can breathe? Josh, now resigned to staying in the barn until the end, explained that the calf was still attached to the placenta and didn’t need to breath yet (indeed, probably couldn’t breathe, given all the pressure on its chest).
It looked like Shadow wanted to stand again. This was what was causing the retreat of the calf between contractions. Josh reasoned that if she stood at this point, the calf would fall out. 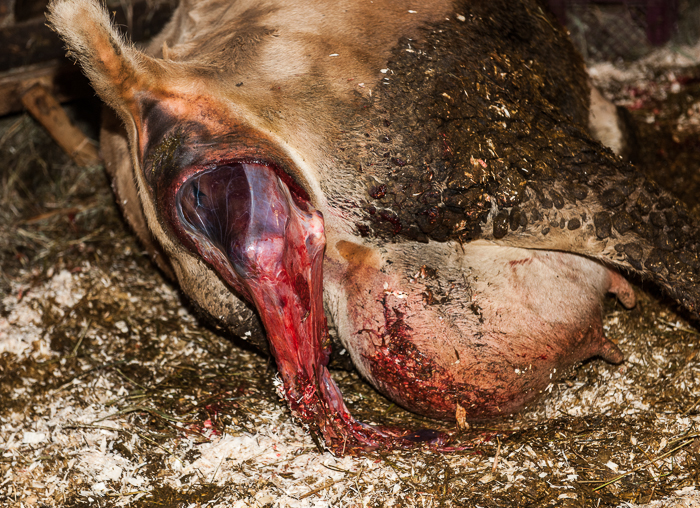 Remember the two steps forward and one back? At this point Shadow STOOD UP! And the calf did not fall out, much to our amazement. Evidently Shadow decided it would be more comfortable to be on the other side of the stall. 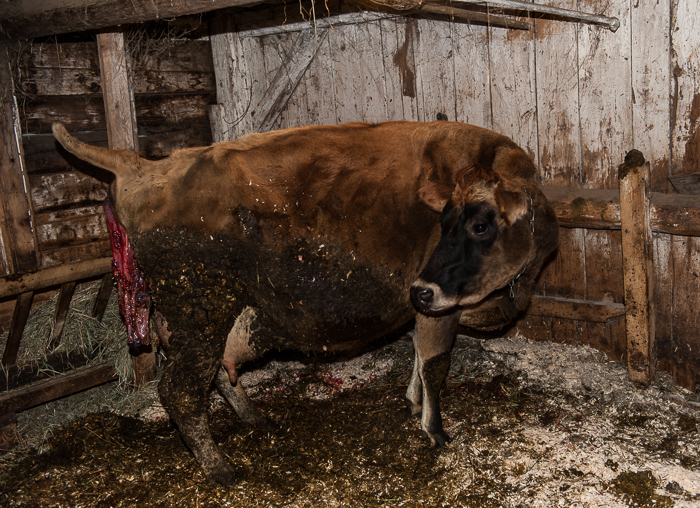 And then she laid back down. Do you see the calves nose? 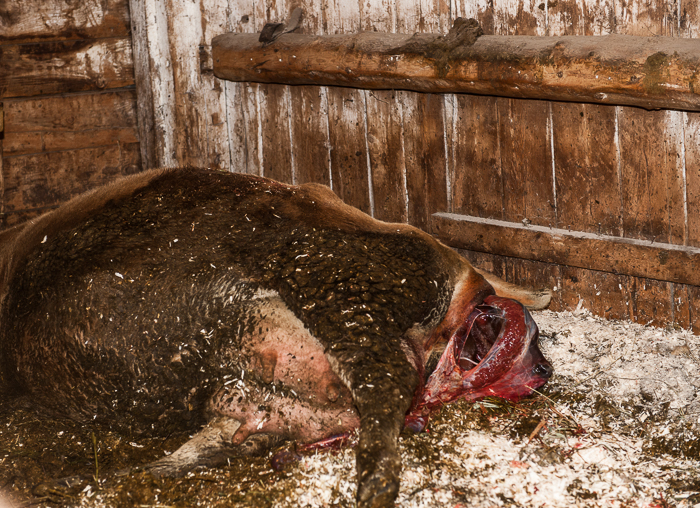 My mom was holding her breath with every contraction. We knew the calf would be named Snowflake so we were encouraging Shadow and encouraging Snowflake verbally. 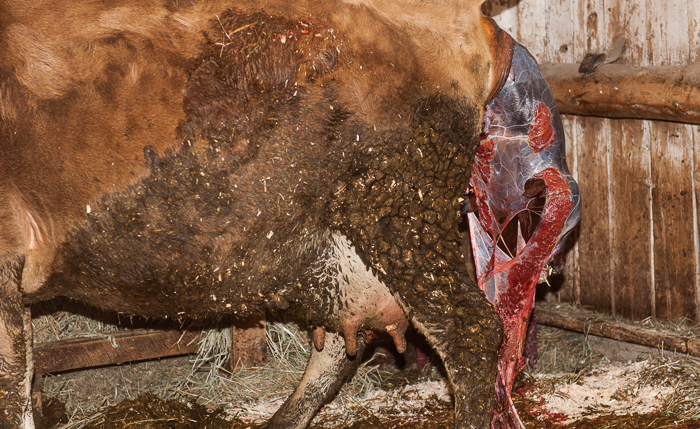 And then she stood back up. 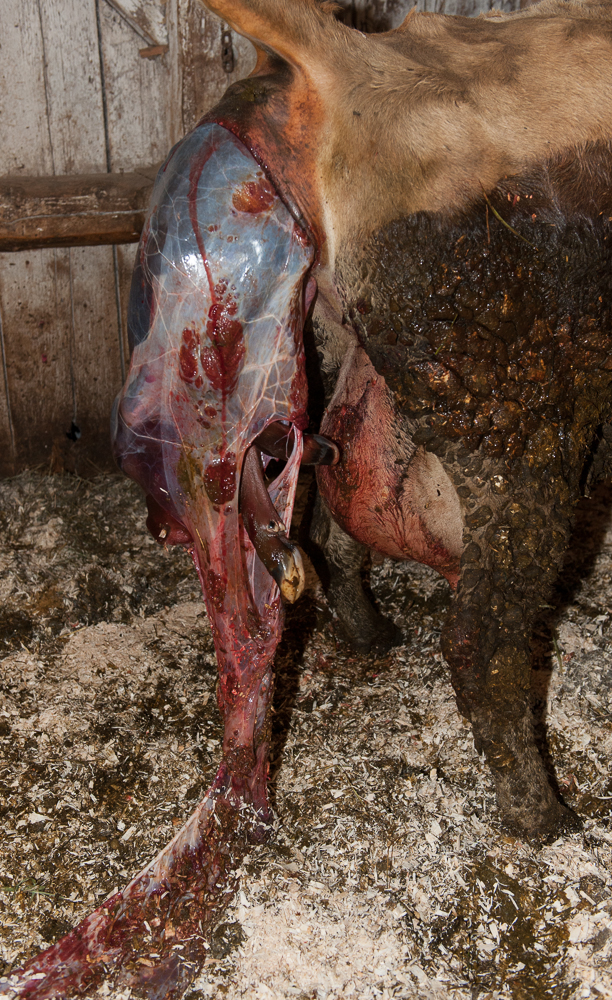 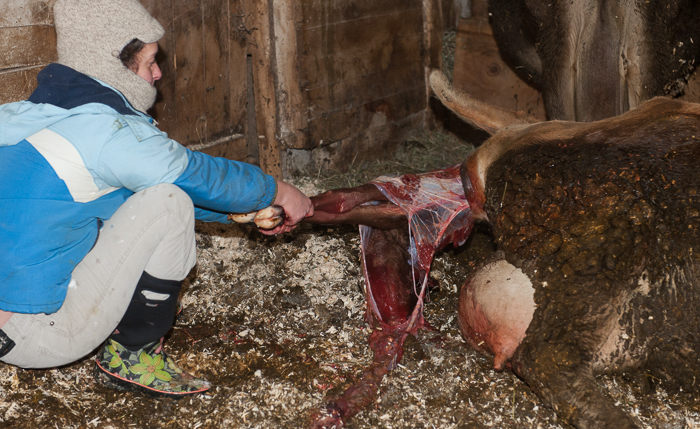 I noticed the calf’s tongue hanging out of it’s mouth, blue-ish in color.
“Josh,” I said, “I think the calf is already dead. It’s tongue is sticking out.”
“Probably about half the births I’ve seen the calves tongues are sticking out like that,” he replied reassuringly.
Before the next contraction Josh slipped through the gate and came by my side. He held firmly to the calves legs and at the next contraction pulled it free of it’s mother.
He moved away as I ticked the calf’s nostrils and tried to feel for a heartbeat.
The calf lay still.
I started to feel myself shake all over.
Suddenly the barn felt MUCH colder – or maybe the cold just suddenly started effecting me.

Josh and I pulled it under the one light bulb that was on in the stall to get a better look. Shadow mooed and followed quickly. Josh rubbed it’s chest brusquely. When there was no response, he lifted the calf by its hind legs in an attempt to drain any fluid that might be causing the non-responsive calf. Josh laid the calf down gently as Shadow slid her large rough tongue across the trunk of the calf, cleaning off the birth remains. Josh picked up a piece of hay and tickled the calf’s nostril. He touched the calf’s eyeball. Nothing. He felt for a heartbeat and felt nothing, as Shadow continued to clean her offspring.
“Is it a boy?” I asked.
Josh checked.
“Yep,” he said. “Let’s go get the kids to bed and then we can come out and milk Shadow.”

We left cow and calf – one caring for the other even after death – while we went to care for our own children who were cold and tired.