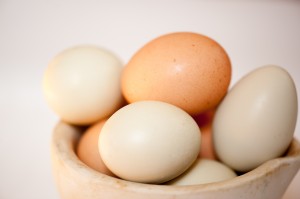 We sometimes receive wide-eyes or raised eyebrows when we answer the question “how much are your eggs?” Our pasture-raised, free-range, organic-fed hen eggs, we reply, are five dollars per dozen. Since supermarket eggs can sometimes dip below $2 per dozen, it may indeed be hard to comprehend how there could be such a price difference – they’re more than twice the price! Nor is it uncommon to know of a neighbor or road-side sign advertizing a dozen eggs from a backyard flock for two to three dollars per dozen, further supporting the idea that eggs are and should be cheap.

We are not trying to produce some elitist egg which only the wealthy can afford, nor intending to price-gouge anyone. Rather, we are trying to produce the healthiest eggs in the most ethical, sustainable fashion, at a fair price.

There’s a lot that goes into the cost of producing an egg, and since we’re at the point of business planning, to develop and grow our farm, I took the time to perform an “enterprise analysis” on each of the components of our farm, including our egg production from our flock of pastured, free-range, and organic-fed hens. Putting together an extensive tally of all the costs that go into producing our eggs yielded some surprising insights, and proves invaluable for understanding our profitability (or not…). For readers who are fellow farmers (even at the “backyard” scale), this might help inform your own pricing, while readers who are purchasers of eggs (of whatever type) might more fully understand all that goes into producing those eggs in that carton.

So here goes, full disclosure ahead! 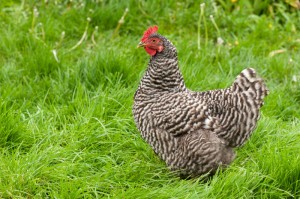 The way I performed our analysis was first to add up all the costs that go into a single laying hen over its lifetime, which I set at 2.5 years. It takes about 5 to 6 months for a newly hatched chick to reach laying age, when it will then lay for about a year, take a break while molting, and then produce again for about a year (at a lessened rate) until molting again (at which point we would butcher the birds for stewing hens, because production levels subsequently drop further and the bird would no longer pay its keep). 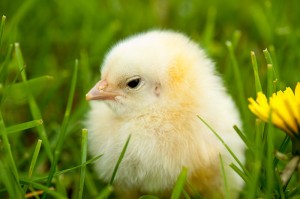 First, the costs of the chicks. I figured about $3 per day-old, sexed chick, delivered to our farm. Of course, not all chicks make it through the brooding phase, so factor in a loss (say, 10%), and the per-chick cost is $3.33. That chick is also going to need some bedding, a heat source, a waterer, feeder, and of course a place to live. Once it reaches about 4 weeks, it can go outside to begin its pastured, “free-range” life – I say “free-range,” because our chickens are not completely free-range, and the reason for this is that we have foxes and coyotes and the like who happen to love chicken. So we raise them outside in portable electronet fencing. We set up a temporary paddock (if using one roll of fencing, we can get a 40′ x 40′ space, but we sometimes combine multiple rolls), and move the birds to new paddocks when they have done a good deal of pecking, scratching, and grazing, which is about once per week with our current numbers. They also have portable shelters. We raise the laying hens in the same manner, just in a different shelter (we’re currently using a gutted camper!) and separate paddocks. In the harsh winters, the birds have to come indoors, where they’re supplied with deep bedding). 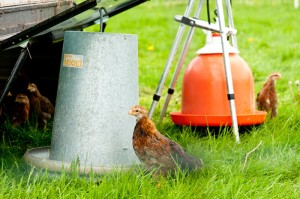 Now, the costs of all that equipment gets both spread out across how many birds it can service (e.g. a waterer can serve 50 hens, while the brooder heater, since it is used for broilers, ducks, and turkeys throughout the summer, might serve 500 birds), as well as how many years it can be used. Added up, I estimated $3.60 going into the equipment and bedding costs of raising a laying hen from chick to “retirement.” There was also the $3.33 cost per chick, so we’re up to $6.93 – but haven’t yet touched the costs of feed.

Going by both what I’ve read on the matter, and what our own record-keeping affirms, it takes about 16 pounds of prepared feed (starter and grower) to raise a chicken to laying age. Afterward, a hen consumes 0.2 to 0.25 pounds of feed a day. Now, we do raise our birds outside on pasture, and we do see them scratching and pecking and grazing, so doesn’t that cut down on feed costs? I can’t say it does by much. For one, it takes energy for the birds to do that work; for another, grass is not easily digestible by poultry. They can acquire a wealth of vitamins and minerals and other healthy compounds from foraging, but not a whole lot of extra calories it seems. (I have read that pastures really high in legume content, such as clover and alfalfa, will provide much of the protein a chicken needs, allowing the grower to feed lower-protein, and thus cheaper, feeds, but our pastures are not at that point right now. Alternatively, really low densities – like 10 birds per acre, would be enough, but then you’d need a pretty extensive perimeter fence or good livestock guard dogs, and enough acreage for a profitable number of birds.)

So, for the two years where a chicken is laying, it will need about 180 pounds of feed, plus the 16 pounds bringing it into hen-hood. We feed certified-organic feed, and when we buy it by the pallet, this year were able to get it for about $23 a bag. The price for smaller quantities at the feed stores seemed to be about $24 to $26 per bag, so we were able to save a couple bucks there. Non-organic, conventional feed seemed to be in the $12 to $14 range, if I recall, so a bit more than half the price.

Now brace yourself. Remember our non-feed costs were $6.93 per bird? Well, the feed costs come out to $90 per bird! So feed costs around 1200% more than everything else combined. Put differently, even when you manage to save money on your equipment and chick costs (say, you throw together a $200 shelter instead of a $400 one), relative to feed those savings really aren’t much. Feed is the predominate expense, and would be the biggest place to save, if you can. We already buy it in bulk by the pallet load (1 ton), albeit still in bags. The next step would be having bins to purchase feed in bulk delivered by the grain truck, but of course those bins costs something too. But you also need to feed that feed quick enough, else you lost a lot of quality. Which means you need more birds, a larger scale, more land, more labor, all while maintaining the integrity of your sustainable practices…plus a large enough market to buy those eggs.

Other potential cost savings include purchasing whole grains and feed components (e.g. shell corn, whole barley, soybean meal, mineral mixes, etc) and grinding/cracking/soaking/sprouting your grains and making your own mix. Again, more storage needed, and probably a grinder of some sort, but you probably would have the freshest, highest-quality feed, and so may save some on the amounts needed. (Buying whole grains by the bag seems to be worse than buying milled feed by the bag – the few times we’ve purchased whole corn or “scratch,” it was pretty much the same cost as the milled feed!)

So the lifetime costs for one laying hen is about $97. Since we can consume the “retired” birds as stewing hens, some value is reclaimed there (a three-pound bird selling for however much per pound), but there is also a butchering cost, so the recovered value might only be $6 to $10. 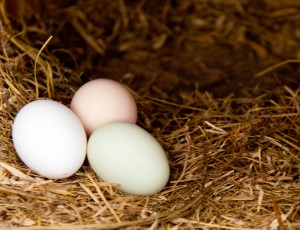 Having considered the expenses, the next question concerns income, and that revolves around how many eggs are to be produced, and in turn the price at which they’ll be sold. While commercial layers may top 300 eggs per year, I don’t think our birds reach that, since we have standard breeds as well as hybrids, who aren’t cooped up in a cage with no room to move… I figure about 250 eggs in the first year, and 150 in the second, for a total of 400 eggs, or 33 and 1/3 dozen.

Now we can spread the lifetime costs of the hen over the number of eggs she’ll produce. Per dozen, the non-feed costs come out to just $0.21 per dozen. The feed costs, on the other hand, are $2.70 per dozen! Add in the costs of packaging (we do have to buy many cartons new) at about $0.35 per carton (and that was buying a year’s supply…), while subtracting the stewing hen credit, and we wind up with a per-dozen cost of $3.08 to produce for sale a healthy egg from our free-range, pastured hen.

Selling that dozen at $5 then, our profit margin on a retail dozen is a bit under $2 (and for our CSA-egg subscriptions, the margin is even less). Remember, no labor has yet been factored into our costs. For how many chickens? We currently keep about 50 layers at a time (half first-year and half second-year layers), along with the replacement set raised over the summer. So if we spread out the 400 eggs a chicken will lay over its total life (not just its productive life, but over the time it is growing and molting as well), which at 2.5 years is 900 days, for a little less than half of its days actually producing an egg, multiplied by 50 hens, we get on average a little under 2 dozen eggs a day. So our average profit per day is just $4. I’d like to say we average half an hour of work per day for all the laying chicken and egg related tasks, for a wage of $8 per hour, but that might be overly generous and optimistic… The pastured/free-range aspect of our production takes the most labor (moving birds, shelters, and fencing is time consuming), but that is the key to the nutrition and quality of pastured eggs. 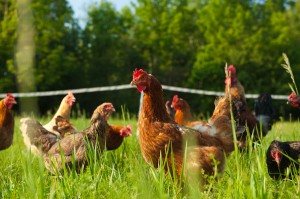 If, for arguments sake, we increased our flock to 100 birds, doubling production, to bring in $8 per day, we probably would not spend twice the labor, so we’d have a better rate of return…but we’d also need more customers or outlets for those eggs, which might include wholesale, which might require grading (candling) each egg, which would be sold at a reduced cost, which would cut into the margins…you get the idea!

Supposing we fed conventional, non-organic feed, the feed costs per dozen, again, over the life of a chicken, would be around $1.45. With the same capital costs, that would be $1.66 per dozen. So this is probably the ballpark costs of the backyard flockster selling eggs (they probably get by with all reused cartons), though the smaller scale may allow more use of kitchen scraps, and more space for the hens to forage for bugs, worms, clover, and the like, so costs are reduced some. But selling, or buying, those eggs at just $2 or $2.50 per dozen is not providing much profit to the backyard chicken keeper, more of a supplement to their costs, for the fun of keeping chickens and supplying their family with healthy eggs.

Thus the price discrepancy with mass-produced supermarket eggs. When someone’s raising thousands of laying hens, their capital costs might not be any less than ours (indeed, it might be more), but the sheer volume of feed purchased is going to reduce their feed costs substantially, and probably their labor per bird or egg will be less as well, through more automation. If an egg is an egg is an egg, there’s really no reason NOT to purchase those $2 per dozen eggs. 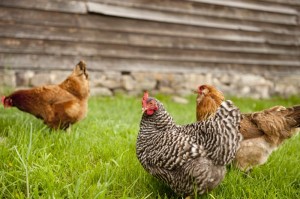 We’re pretty sure, though, that our pastured eggs are healthier and produced in a more ethical fashion. By the way, certified-organic eggs in the grocery stores seem to be about $5 per dozen as well, but that doesn’t mean they were pastured or free-range…

So there you have it – our small farm “egg-onomics.”