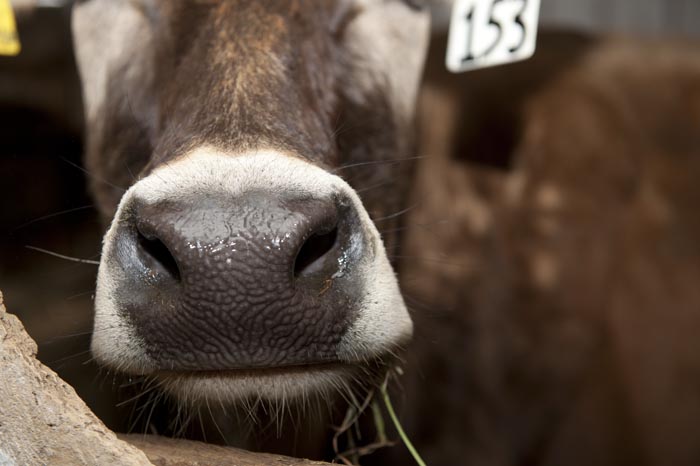 It was early and cold as we made our way out to the truck we’d borrowed from Josh’s dad with the trailer hitched to the back. I had gps in hand and the address to the auction. Our goal was two milk cows and we wanted Jerseys for their higher milk solids – great for making butter, cheese, and other dairy products. The auction flyer which had arrived at Josh’s parents house two weeks before our move to our own farm promised a liquidation auction including 33 Jersey and Jersey-Holstein cross cows.

Open time was 9am with the auction beginning at 11am.

We were very uncertain as to the typical goings on at a farm auction. Josh remembered going to one auction that was a farm liquidation with his farm and everything was being auctioned off.

We plied Josh’s dad with questions. His knowledge was limited because the auctions he generally attended were machinery focused. He did know that we’d have time before the actual auction to look at the animals and there would be some information about each animal.

“What about when the last time she calved?”

“What about how many lactations the cow has had?”

We decided to arrive for 9am to give us maximum time to make our decisions on which animals to bid on. During our drive out to the auction we discussed names. More accurately, I suggested names and Josh didn’t engage. Historically I named the animals and Josh gave a stronger (much stronger) opinion when it came to our children’s names (opinions mostly of: “no … no … no…”). Josh pointed out that with it being a small dairy at 33 cows, they may already be named. I scoffed. Who could keep track of 33 names?! I suggested Daisy, for sure. Maybe Abigail. Or what about Daisy and Violet? A flower theme.

We knew we were in the right place when we spotted bright yellow signs saying “auction TODAY!” I noticed that there seemed to be only a few cars. We hoped there wouldn’t be a good turn out and assumed our chances were good because jerseys are not as popular a breed as Holsteins. Plus, the farm being small we hoped it wouldn’t attract too many bidders. The few cars assured us that our competition would be slim. We parked by the guard rail on the side of the road, noticing white plastic chairs already facing a corral at the end of the barn furthest from the house and the driveway to the farm. We made the trek the length of the old barn situated below the road before a break in the guardrail at the farm driveway. We didn’t want to seem to anxious and we’re feeling quite uncertain wandering around an unknown farmyard.

We were regretting not wearing another layer and I was sorely regretting not grabbing a hat before leaving the house. We’d had a week of very unseasonably warm weather but for some reason the weather had turned cold again.

We decided to look around at the miscellaneous supplies outside the barn before getting to the cows, despite our anticipation of seeing our future animals. This was partly because we weren’t certain that the opening in the barn wall that required ducking to gain entrance to the barn was in fact the door for humans. We made note to bid on a pitchfork, a shovel, a box of harnesses. We also noticed an artificial insemination kit, three hay elevators, a Rubbermaid water trough, a baler, three tractors larger than we needed. This gave us time to observe the few other people around using the crouching slightly to get through the door that was around five feet in height and cut into larger sliding doors on the short barn wall. We made our way inside, passing under a hay elevator before ducking through the door. In the front area of the barn was a dozen or so cats. I wondered what their fate would be as the mouse population and perhaps a rat population decreased as the feed stopped coming in for the cows.

We strolled further into the barn to find ourselves in an aisle with the cows tied on either side, butt side toward us. We were familiar with this, Josh’s dad having a tie stall barn also. In the barn Josh’s dad uses there is a separate parlor where the cows go twice a day to be milked. With this pipeline barn the cows stayed tied all winter and the milker moved to them.

A mid-30’s square shaped gentleman smiled at us and said “good morning”. We shyly returned his smile, still uncertain about where we were allowed to go and what we were actually looking for in the cows.

We giggled quietly at the Holstein crosses as they were tiny seeming in comparison to the Holstein’s Josh’s dad has. That was the Jersey in them, making their frame smaller. We were not interested in any Holstein so skipped the black spotted cows in favor of those with tan markings. Many were solid in color.

We noticed a small grey-brown jersey who appealed to us. She seemed older, but we had no way of knowing. Josh stepped between this girl and the one next to her and the grey-brown cow stayed calm, very calm. She was our girl. Then we noticed that she had a ‘D’ painted on her hip areas in fluorescent orange. Josh thought it might mean she was dry, pregnant and near calving.

“Would you guys like a catalog?” a medium framed man asked from the aisle.

“Yes! Thank you,” we both said together, still using quiet voices as it seemed most of the other people, primarily men, were doing. It struck hard that while we were excited about the acquisition of a long dreamed of milk cow, this was perhaps a somber day for the farmer who was choosing to retire and auction his animals and equipment. With no one interested in taking over his life’s work, he was compelled to sell it off, piece by piece.

When the kind man returned with the “catalog” it was nothing like I expected.

What do you think we were handed as a catalog? Find out what happened in the next part of our Auction story.