“She’s here! She’s here!” my mom said to said to us frantically. I slowly came to consciousness and lifted my heavy head up to look at what time it was. One of our regular customers had said she’d be early.

We must have lost power, that’s why the clock was reading such an early time.

But it wasn’t blinking.
I was confused.
“Who’s here?” I asked groggily.

“The calf! Hope had her baby!!” my mom said in a loud whisper.
I sat up in bed and started donning barn clothes.

Reassured that I was committed to waking up my mom fled down the hall to go back outside.

“Are you coming?” I asked a still sleeping Josh.

“No,” he mumbled – or something like that. Having grown up on a dairy farm I guess another calving wasn’t worth waking up for. I can’t say I understood because every calving at Josh’s family’s farm is fun and I didn’t want to miss seeing Hope’s baby all wet and new!
When clothes finally cooperated about getting on my body I ran down the stairs hopping as I went trying to convince one sock onto each foot.

I slipped my boots on at the mudroom door and resisted running across the yard and into the pasture to Hope.
My mom was standing on the outside of the electric poly-wired paddock, near Hope who was inside the paddock but making some less than happy sounds.
“Where is the calf?” I asked my mom. She pointed to just outside the poly-wire – out of Hope’s reach.

I grabbed one of the calf’s back legs and lifted. The calf was tiny and wet warm and slippery. A girl!

“It’s a girl!!” I said with excitement. “I need to get her in to Hope so she can clean her off and warm her up,” I explained to my mom and noticed my dad had joined us outside.

“Should I turn off the fence?” my dad asked, nervous about this transfer where electric fence was involved.

I grabbed the calf’s back legs and dragged her to Hope, ducking low as I passed below the electric line.

Hope’s anxiety immediately ebbed. She started cleaning the calf in a leisurely way. The calf’s breathing was worrying me a little. I could hear a rattle in her chest and debated lifting her by her back legs to help work the fluid down. I reminded myself that generally birth works without intervention and despite the calf ending up on the outside of the paddock, this birth had worked well so far.

“Hope woke me up with her mooing!” my mom said, clearly on a birth high from all this excitement – and I felt it too! “So I looked out of our bedroom window and I saw something dark in the grass. I came outside to look and the calf was here! So I ran back inside to tell you.”

“That’s so cool!” I said. “I’m a little worried about the rattling the calf is making.” We all watched in wonder as Hope continued to clean her calf and Shadow came over to lovingly help with the cleanup. Parts of the calf were already dry!

“What is that dark spot?” my dad asked, pointing to a dark thick thread-looking thing inside the sack of water coming out of Hope.

We watched in awe for another few seconds – mostly in awe as Hope’s beller echoed off the nearby mountains. Hope made her way to a laying down position, being sure to stay close to her calf at the end of a contraction.

As another one started my dad said: “honey, that’s not blood vessels – those are hooves!”.
Upon closer inspection I saw that he was right.
“It’s twins!” I announced in a very sad way. I knew twins was not good news. If the female calf that was already birthed shared her mom’s uterus with a male she’d likely be infertile. I explained this sad phenomenon to my parents who demanded an explanation. I had none as it was never a pressing issue in the past. Sure, Hope was e-n-o-r-m-o-u-s when pregnant – but who isn’t? 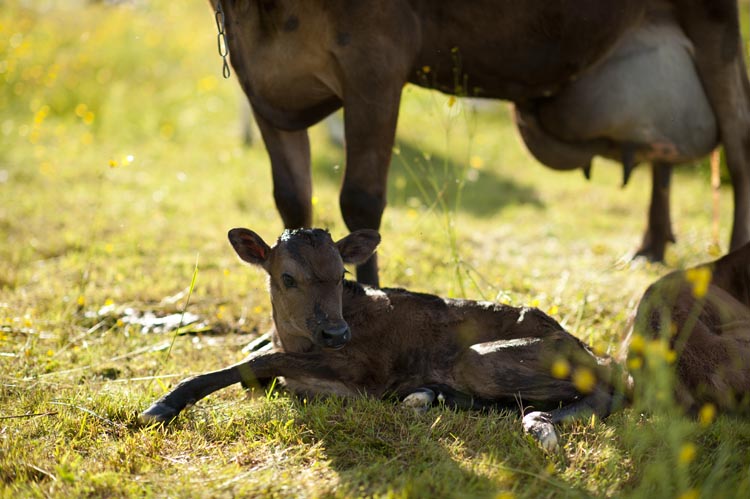 “Go get Josh,” I said to my parents, “tell him it’s twins and I’m not sure what to do. Tell him that the calf who is out has rattling in her chest.”

Off she went while I hoped that Josh would come outside for this.

Hope continued to work out the new calf making tiny bits of progress. Shadow stayed nearby and continued cleaning the already-birthed calf before having enough of it all and going off to munch on some grass.

I heard the backdoor open and Josh ambled across the yard toward the pasture.
“It’s a girl!” I said, “… and it’s twins, see?”

Josh observed without responding, which is his way. We watched as the calf’s head and shoulder eased out of the birth canal. Josh pulled it out the rest of the way. I chastised him for this, again, my natural birth feelings coming forward.
He looked a little surprised, despite his ardent support of natural birth.
“As soon as the shoulders are born it’s okay to help ease the rest of the calf out,” he explained.

I stomped my foot suddenly. “My mom! She didn’t make it!!” I realized, slightly distraught.

“Is it a boy or a girl?” I asked, moving on to the next important issue of the moment. Josh lifted up the calf’s back leg and saw the tell-tale boy.

Hope was immediately up and licking her newest baby clean. Shadow sauntered over to help with the cleanup detail.

I heard the backdoor open and out came my mom with two coffee mugs in hand.

“I missed it?!?!” she said incredulous when she reached us.

“I didn’t know ‘you have time’ meant make coffee!” I replied in protest. “I’m really sorry,” I felt pretty terrible that my mom had missed the event.
We knew with a Hope and Shadow we wanted a “Chance” (after Homeward Bound characters). We joked about naming the calves Fat Chance and Slim Chance (or Fat and Slim).

Noticing that my belly was complaining for lack of breakfast I slowly moved away across the pasture, across the backyard, and into the house.

A hearty breakfast was made and the children wandered downstairs with sleepy eyes.

“Hope had her baby!” we said, “There were two!”
“Hope and Shadow had their babies?!?!” Del said incredulous.

While breakfast cooking was happening I was researching what I learned was called “Free Martinism” – the phenomenon that happens in 90-95% of male/female twin births in cows. I learned that the female twins sexual organs are stunted because the male twin’s sexual organs develop faster in utero. As the twins share a placenta their blood is shared. Therefore hormones (namely testosterone) are shared and as the male develops more quickly his testosterone suppresses the development of her sexual organs before they have a chance to develop – in 90-95% of the cases.

Scrumptious eggs, yummy milk, delicious bacon, homemade bread, and we were back out to the pasture to check on the calves, now dry. 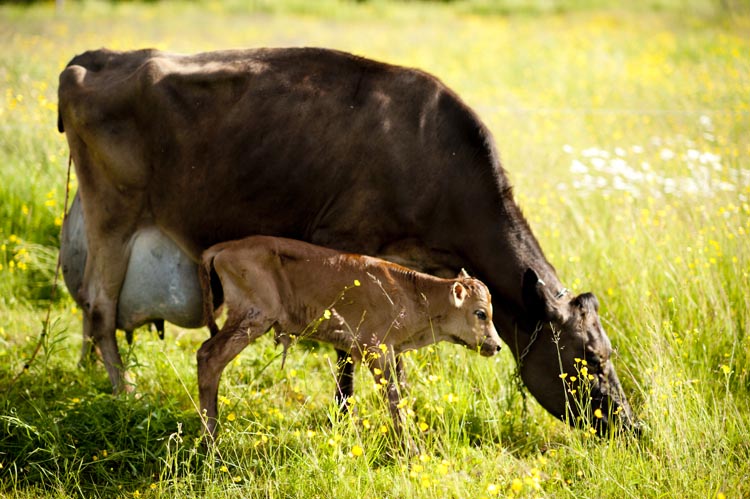 We decided Chance would be the male and after some deliberation decided to name the female Liberty (as in FREE Martin) and call her Libby.

Not long after we remembered that we had a farm that needed us, beyond the calves. So we milked their momma and Shadow, fed pigs and piglets, chickens and chicks and our day started to feel a little more normal with a glow of specialness that new babies bring.