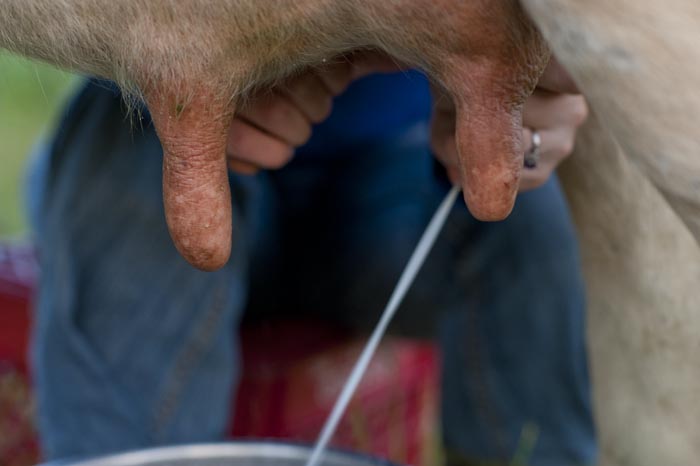 Frequently visitors come to our farm. Mostly family in the beginning while stripping wallpaper and planting seeds and then very soon new friends started coming and we are always proud to show off our cows. When overnight guests visit we encourage them to come to a milking. Everyone is very pleased to hear that we milk between 8-9am and 8-9pm, not the expected 5am-ish of dairy farmers.

One night I came downstairs after putting the kids to bed, Josh and my dad came in from milking, something my dad had wanted to try.

“He turned the faucet off on me!” my dad said with a laugh.

“What do you mean?” I asked, not sure of the joke and also feeling rather tired.

“I tried to milk and Josh turned the faucet off on that side! I tried twice. And then he showed me that the faucet worked for him! But then he turned it off again before I had a chance to use it again!” Both men laughed and I joined in. It was reassuring to know that my milking skills could be worse and they were noticeably better from when we first brought Shadow and Hope home to Woven Meadows.

When my dad said he wanted to help the next night and my mom were helping the kids to bed, I was excited to be part of my dad learning. He donned coveralls and came out in the chill night air to the barn. “My side” of the udder being more manageable it made sense to offer him my milk crate and a brief tutorial on how to milk.I watched as a tiny stream of milk hit the bucket.
“That’s great!” I encouraged, “milk came out!” I watched another stream come out and noticed my dad’s concentration in his face. “Just take your time, and don’t pay attention to how fast Josh is going. Remember that we’ve been doing this for three weeks now and there was definitely a learning curve for us.”
I took my dad’s minimal response as understanding and concentrating on the task at hand. I wandered away to complete other barn chores. I threw down bedding hay, increasing our bedded pack (hay being less than ideal for bedded pack but what we had on hand); putting older hay in the feeder for Hope and Shadow; adding yummy second cut hay to Shadows feeder; topping off both of their watering troughs.

Not wanting to rush my dad I picked up stray baler twine that was on the barn floor and added it to an impressive pile left by the previous farm owners. I casually walked past my dad and saw that for every three streams Josh was putting into the bucket, my dad was concentrating seriously on his one trickle of milk.

“Dad, do you want me to take over for a little while?” I asked.

“Yes,” he said immediately, “sure,” he tacked on with a more casual tone.

The streams of milk flowed from both quarters on my side and the foam doubled on top of the milk. My dad went off to finish up chores he thought still needed to be done and we filled the bucket.

Josh put the lid on the bucket and we stood up moving our seats aside to make room for Shadow’s return to her pen. I asked my dad if he wanted to put her away, knowing from our experience that morning how this would likely go. My dad, who was not present at morning milking, was up for anything. He boldly unlatched Shadow and grabbed onto her neck chain. Shadow then proceeded to take my dad on a tour of the barn, the scenic route before returning to her stall. We watched, and definitely laughed, as he held on for dear life and was pulled this way and that until she was happily munching hay in her stall. Out of breath, he joined us in our laughter.