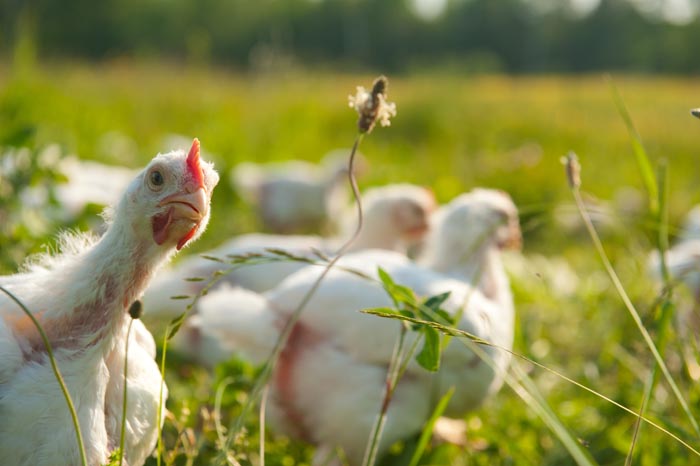 An elderly woman approached our table at the farmers market and began perusing the whole frozen pastured chickens available. Thirty seconds into her perusal an elderly gentleman also began looking at the chicken and seemed to continue a conversation with her with words like “organic” peppered throughout. I debated interjecting that our meat was not in fact certified organic and presenting reasons why, but it seemed impolite to interrupt and I wasn’t certain what was being said. I reasoned that if they wanted to know, they’d ask.

At one point the gentleman picked up a bird and said: “See this? At $17 for a bird, organic seems hard to justify.”

The woman nodded numbly and pulled her hand out of the cooler and followed him halfheartedly off to the stand opposite ours, where the couple proceeded to buy a shade grown fair trade chocolate bar for $6.

Our birds at about $17 a piece were priced at $3.50/lb, the least expensive meat at the market. We were able to sell them at this low rate because we had not fed them organic grain, a decision made out of fear that higher prices (necessitated by higher feed costs) would not sell. After a year of growing food this way we had changed our minds about the importance of choosing organic grain, but this is the chicken we had to sell, and it was selling well, for the most part.

We determined $3.50/lb as the fair price after factoring in costs: initial chick cost, feed cost, shelter cost amortized over the life of the shelter, electric netting cost amortized over the life of the netting, trough and water supply costs amortized, tubing for the water system amortized, and our time. When comparing this $3.50/lb rate to what one might pay for a conventional piece of meat at a large grocery store, I understood that our pricing would need to be justified. However, to those doing their research about their food and understanding the quality in a humanely raised pastured bird versus a factory farm bird … these people understood the true cost of food and were thrilled to be purchasing meat from a farmer they trusted.

For the gentlemen scoffing at a $17 bird, it was challenging not to suggest that he begin raising his own meat birds and then consider how much he’s willing to pay to have someone else provide this service for him.

I love that we raise our own meat, but it’s not for everyone. So I also love that we can provide quality local healthy meat to our community. But that requires a community supportive of farmers who value the work they do through monetary compensation or bartering.