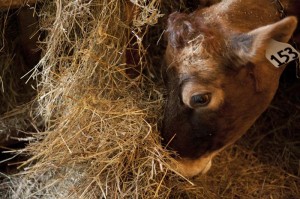 Spring is coming, despite the continuing snowfall. We can tell because Shadow has started shedding her winter coat. Her transition from winter to summer fur is dramatic. It always makes us nervous because it’s so sudden and happens when it’s definitely not warm enough to be thinking about spring! And yet, her body knows, and her thick fur sheds readily with thin buzz-cut looking fur left in its place.

Another sign of spring is that the ducks are getting more and more …. chatty. Our Muscovies don’t quack, they hiss. It’s a Muscovy thing. Usually they’ll hiss when something has alarmed them. It could be that the dogs have wandered in to the barn (something we don’t usually let happen), or a duck from our laying flock has entered the Muscovy flock, something like that. Every morning this week the Muscovies have been up in arms! They are hissing and flapping and clearly agitated. The first time, I finished putting the milker on Dana, and walked over to the ducks, tucked behind the tractor, hissing and carrying on. I couldn’t see what the fuss was about. There were no intruders, no oddities. Then I realized, the ducks had circled to hiss encouragement (or not) to the two drakes in the middle trying to gain top-drake status. Spring is coming. The drakes want first mating rights.

Despite the snow, there are chore times when after bundling up in multiple layers, we find ourselves shedding coats, gloves, and hats in the barn as we work. It’s getting -dare I say – hot! Even so, one morning early this week I woke in the dark (time change:: curse you!) and stumbled through getting dressed. I 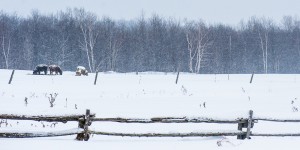 stoked the fire, layered up in outerwear, put together the milker while filling a bucket with warm water (to thaw the inevitably frozen rabbit waterers), and made my way to the back door. The red outer door, you know the one? It was stuck. The freeze-thaw cycle had caused ice to adhere to the back door and it was impossible to open. Feeling discouraged and sad I made my way back in to the house as quietly as possible, snow pants sh-sh-shing as I walked.
“Josh,” I whispered, “I can’t get the back door open.”
Groggily he got out of bed. He had done his share of morning chores and was looking at a very long day at his off-farm job that day.
In pjs he went out to the back door, yanked, then pried the door open with a mattock lying close by, and the door was open. He grabbed a handful of the nearby salt and flung some on to the ice before making his way back to the warmth of our bed.
So it’s not quite spring weather yet. Or maybe this is spring weather.

This time of year, we’re numbering the days by remaining haybales. There are about 80 second cut bales

and each cow eats about a bale a day. This gives us about a month of second cut hay left, not enough to see them through till new grass. Fortunately we have plenty of first cut bales, some of which are fairly good quality for a first-cutting, and while they are not preferred by our milkers, they are munching them down grudgingly as we attempt to spread the second-cut-yumminess into the spring.

A Wholeshare order is being placed on March 31st. We’re half-way to the minimum order, so if you’re interested in ordering, go add your items! At the farm the ducks have been generous – so come pick up 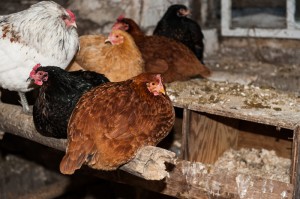