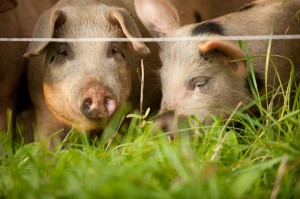 ‘Tis the season – for pork, that is. Still following a tradition of starting piglets in the spring and early summer (raising them through the warm months, and finishing or fattening them on the abundance of fall), many local Adirondack farmers are now harvesting and selling their hogs for pork, ourselves included. Now is one of the best times for consumers to fill their freezer with a whole of half hog, raised and butchered as they like. Probably no surprise here, but half of those hogs are female, half male. And of those males, probably most are castrated. But our male pigs are not.

If you find yourself asking “so?” then you probably aren’t familiar with “boar taint.” When we first started raising pigs, anyone with even third-hand hog-raising experience would tell us “you can’t eat a boar!”, adding that “it’ll taste like [I kid you not] piss” or other choice words. Why? The male hormones produced by a boar can make the meat taste so foul and rank as to make it virtually inedible. Hence the long-standing practice of castrating male piglets – making a cut into either side of the scrotum, pulling out the testicles and cutting them off and out. This transforms the “boar” into a “barrow” (the bull/steer distinction of the porcine world). Plus, many say, barrows grow faster than boars.

As it turns out, taint ain’t so simple. (Taint/t’ain’t – nice wordplay, right?)

Yes, boar taint is real, and when present, it makes the meat smell and taste awful: about 75% of consumers can detect and taste boar taint (meaning 25% of you all are off the hook though!), but 75% is a pretty good reason to eliminate taint one’s pork. Hence castration (usually physical, but sometimes chemical/hormonal). 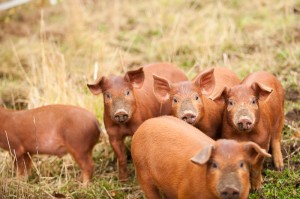 However, hold the scalpel: taint is present in only about 20% of boars and male pigs. This means 80% of male pigs are being castrated unnecessarily. Taint is also differentially present according to breeds: Durocs seem to have the highest levels if incidence, while lighter colored breeds like Landrace and Yorkshire have it less. This is the genetic basis to boar taint. There are also management factors, which have to do with what causes taint. Why should we care? (This is the $64,000 question after all.) I’ll get to that.

So what are the causes of boar taint? Two compounds which can be deposited in the fat of growing pigs can cause the off-smells and flavors in the meat (really just the fat) down the the road. One is androstenone, a pheromone produced in the testes, but also the adrenal glands; the other is skatole, produced by bacteria in the intestines. These can be chemically (objectively) measured, in addition to being tasted by many (a subjective measure).

Regarding skatole, and noticing the root of the word, “skat-”, clues you in that this has to do with feces. Skatole can be produced from pigs inhaling or ingesting their own feces, which is prone to happen with pigs raised in cramped conditions. Turns out, raising hogs on pasture virtually eliminates the risk from skatole taint, a combination of having more space as well as access to high-fiber vegetation. Even after just two weeks on pasture, a hog previously with skatole will no longer have it afterward. While skatole can be present in barrows and gilts (female pigs) as well as boars, steroids produced by the boar inhibit the breakdown of skatole, so they accumulate more of it. Hence castration reducing this taint factor.

Androstenone is produced by the boar’s testes, a pheromone with a urine-like odor, which can be deposited in the fat as the boar matures. This factor in boar taint seems to be less effected or controlled by management and diet, and simply more linked to genetics and sexual development. So, again, typically castration to the rescue.

We’ve steadily been harvesting boars here on our farm, and thus far have had no complaints. Did we luck out? Some advice for minimizing the risk of boar taint is to harvest at 6-7 months of age, or under 200 to 225 pounds live. Our first set of hogs that we brought to the USDA processor were more like 8-9 months old, and their hanging weights were 220, 200, 190, and 175 pounds (the formers two being the uncut males from the bunch, the latter two the females). Add 40-50% to those numbers for the live weights. This means that those 220 and 200 pounds hanging-weight males were around 300 pounds live – a pretty far cry from the recommendation of 220-pound slaughtering. They also lived with the females, and being raised over the winter, (unfortunately) did not receive as much pasture forage as we would have liked – only in the first few months and then again the last month-and-a-half or so of their lives. But they did get some whey over the winter, which reputedly helps as well.

There were originally 5 pigs in the bunch, and one of them, also a male, who refused to get on board the trailer come slaughtering day appointed himself the hog for our June pig roast. This means this boar grew another month and a half, getting bigger and older to around 10 months of age, and quite heavy indeed! But that was also more time on pasture, pretty much alone (there were some weaners next to him), and he ended up getting a lot of whey and milk to eat/drink.

Presumably their genetics played a role too. These pigs were roughly half Large Black, half Tamworth, with a smidgeon of Hampshire in there I think. We’ve also butchered a Yorkshire boar and a Tamworth-something boar in the past which have turned out find as well. The stars of genetics, management, and feed all aligning? Most recently, a 3/4 Large Black 1/4 Tamworth boar went to the freezer, taintless again. This one was also big, hanging at 200lbs and around 8.5 months old. Most surprising, though, was that we later learned this fellow was in fact sexually active (a bit of brotherly love with his sisters…), as one of his sisters which went to the butcher a month later turned out to be well along in pregnancy, meaning at around 6 months old there was breeding going on.

But if we are playing Russian Roulette each time we raise a boar, why do it? Why not just castrate? Most obvious is the humaneness issue – not castrating avoids a stressful and painful procedure for male piglets, usually done by the farmer rather than a vet with the use of anesthetic. Of course, ethical issues like humane treatment can be a good if not central selling/buying point for many consumers.

Which leads to economic reasons as well. Castration takes time for the farmer. And if the cut gets infected, this could require medical treatment, setback in weight gains, or even death for the pig. Plus, it turns out (studies attest, in one form or another), barrows actually grow slower than boars, and/or require more feed to reach the same weight (i.e. barrows are are less efficient growers). Plus, compared to boars, pound for pound barrows are fattier, while boars are leaner and thus have more muscle, more meat. (They also tend to be longer, and – pop quiz – longer hogs mean what (proportionally)? That’s right, more bacon!) Finally, for anyone raising their own breeding pigs, not castrating males gives you a pool to pick potential breeders from; castration closes that door early on.

Presumably we are doing something right with out management (e.g. housing and diet) – something which others interested in raising boars can do as well – we can continue these practices, but genetics are less easily controlled. It highlights the need to continue to source feeder piglets from sources that have proven not to present boar taint in the past (i.e. in slaughtered boars), and/or to continue raising our own from established taint-free lines. It is also possible, when or if bringing in new blood, to have that boar tested while live, through a blood test (which can chemically measure the levels of androstenone and skatole present, and correlate to the levels detected by smell and taste) or even, as Walter Jeffries has done (http://sugarmtnfarm.com/2012/03/20/have-your-pig-and-eat-it-too/) take a tiny biopsy and test it. Somewhat anecdotal, and a bit research-based as well, it seems aggressive, dominant boars tend towards higher levels of boar taint. So by selecting for docility and friendliness, one may indirectly select for less boar taint potential as well – both good! 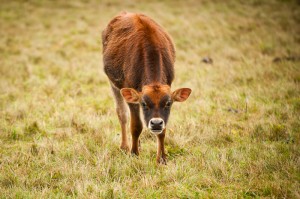 In researching and writing this, I did get to thinking – if we can get by without castrating boars, can we do the same for bulls (and rams or bucks, if we raised those)? The answer here seems: maybe. The good news is that rams and bulls are even less likely to have off-tasting meat than are boars. There’s also a different procedure available to castrate a ruminant – they can be non-surgically banded. Or if using surgery (for a bull), it can be easier to justify, economically, having a vet perform it, with anesthesia, since the cost of that procedure applied to a bull calf will be spread out over many more pounds of meat in the end (anywhere from 5 to 10 times that of a pig; this is what we’ve done with our bull calves to date).

The exception to the male-taste issue may be a ram during rut, the breeding season when hormones run high (or a goat buck, which can stink to high heaven). But there are management issues too. Consider lamb: typically born in the spring, they could grow and finish on grass through the summer and be butchered in the fall, on the smallish size. However, if you want lamb on the larger end, you need to keep them through winter. But then you only have a couple months in the spring before the rut starts later in summer, so its not really worth holding over the winter if you only get a bit of grazing in before the rut. So making a ram lamb into a wether provides more flexibility for slaughtering times (if rut-flavoring holds true). But for fall-finishing spring-born lambs, castration is not necessary.

Bulls also present a management issue, but not so much regards breeding directly – rather, bulls can be dangerous, and they can start being so well before fully grown where you’d want to harvest them. There’s a truthful adage to “never turn your back on a bull” – never mind a whole herd of them. A 200-300 pound possibly aggressive young boar is one thing; a 1500-2500+ pound bull is quite another (I imagine Kristen Kimball at Essex Farm would agree, from reading her The Dirty Life…). But there are benefits as well, like leaner meat in bulls compared to steers and faster or more efficient rate of growth. I would suspect that temperament is heritable, so perhaps one could select more for docile bulls (but friendly, docile bulls are also known to be closet aggressives, surprising you when you don’t expect it!). So will we ever raise bulls for beef? I can’t yet say. 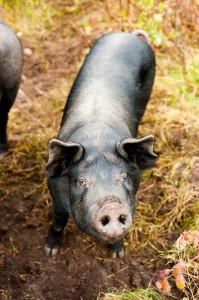 In the meantime, we’ll continue to raise – and promote – boars destined for pork, and if you join us in that, more (bacon) power to ya’!