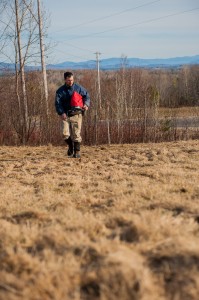 While there are still freezing nights (mostly) and chilly-to-warm days, we frost seeded clover on our pastures. We’re excited to see the improvement this summer! When we first arrived at this farm a little over two years ago the pastures were very much in disrepair. We’ve spent the last two seasons rotating animals and seeing a dramatic improvement! So this will be the icing on the ever-improving pasture. Part of our mission is to be good stewards of our land and livestock. It’s so gratifying to see our dedication paying off in thicker, lusher pastures.

The “experienced” chickens have been wandering out of their barn shelter and pecking enthusiastically at the ground as the snow receeded. While they’ve had the option to go outside all winter, they have wisely avoided the snow. It’s fun to see them wandering far and wide across our yard seeking sweet young grass as well as any bug-type creature that is brave enough to show its face this early in the year! 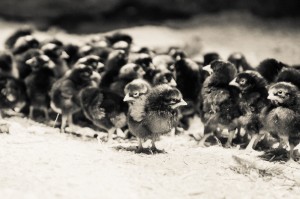 Another sign of spring: the first batch of meat chickens arrived. Every time – especially the first batch of the spring – I’m surprised once again at how tiny these birds start! We start them off with whey in addition to their organic chick starter. They whey is an electrolyte-filled jumpstart for these little guys. They’ll spend approximately 3 weeks in the brooder and then be moved to the pasture for that delicious grass and grubs that the older layers are already enjoying. 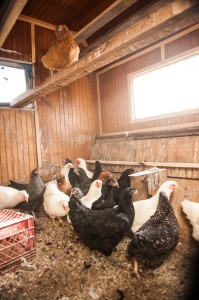 Back in December, right before Christmas, we ordered close to 100 egg layers. This is not what we’ve typically done in the past (ordering chicks at the beginning of winter) and is not the norm in general. But, when chicks arrive in the spring, they start laying in earnest in the fall – about the time the more-active farmers’ market comes to a close and the pasture output decreases dramatically. So this year, we started egg-layers-to-be in December, and we expect them to start laying any day!
To make room for the meat chicks, we moved these “teen” layers-to-be to the chicken camper-coop. They’ve spent a few cool nights tucked up toasty with their peers. In the next few nights we’ll move over the experienced girls and then let everyone out of the coop to explore the pasture, within an electric net (for their protection – we don’t mind if they fly over it to explore further afield!).

When Josh went to the auction a few weeks ago he was able to snag the biggest piece of equipment we need for the creamery – the vat! Woohoo! It’s waiting for us in the barn while we continue to ready the creamery space.

Several pigs will be going for USDA processing in a few weeks. If you are interested in a half or whole pig, speak now!

Josh will be at the winter farmers market at the Oval in Plattsburgh from 10am-1pm with artisan bread, duck eggs, pork, duck, and milk soap. 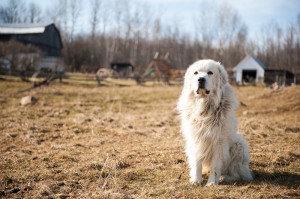